The Punch 1 day agoThe biggest entertainment stories of 2021Tottenham are getting to grips with ‘big mess’ of Covid, says Antonio Conte

State governments have intensified preparations of isolation centres in readiness for possible admission of COVID-19 patients as cases of the virus continue to rise in the country. 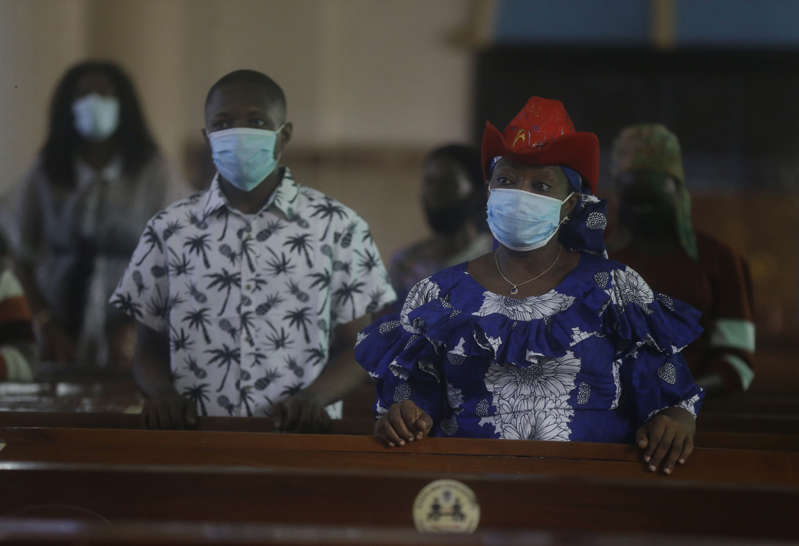 Officials of states including Ogun, Gombe, Benue, Lagos, Ondo and Sokoto, in separate interviews with our correspondents on Sunday, said they had enough bed spaces to admit COVID-19 patients.

This came to the fore as the number of officially confirmed COVID-19 infections hit 236, 014 while the rate of full vaccination was stalled at 3.9 per cent as of Saturday.

Despite the increasing cases, the Nigeria Police Force, the military, and other security agencies have failed to enforce the compulsory vaccination mandate for their personnel.

On Friday, the country recorded 1,584 new cases, while on Saturday the Nigeria Centre for Disease Control confirmed 1,305 new cases of the virus.

The agency added that on Saturday alone, 21 persons died of COVID-19 complications bringing the fatality toll across the 36 states and the Federal Capital Territory to 3,014.

Amidst the surging cases, the Ogun State Government said it had no fewer than 260 bed spaces in the four isolation centres in the state.The state Commissioner for Health, Dr Tomi Coker, while fielding questions from one of our correspondents in Abeokuta, said there was no need for more beds over the rising cases of COVID-19 .

She said “Ogun State has 260 isolation beds; four isolation centres. No no need for more beds.”

Coker said the state was not charging any fee for COVID-19 tests .She however said N39,000 was being charged by private laboratories in the state.

Benue State has 100 bed spaces.The state Commissioner for Health and Human Services, Professor Joseph Ngbea, who disclosed this to one of our correspondents, added that there were 50 beds “as back up” in case of upsurge of the dreaded disease.

The commissioner further said that there were two functional isolation centres in the state, one at the Federal Medical Centre and another at Benue State University Teaching Hospital all located in Makurdi, capital city.

The commissioner said there were other isolation centres across the state, which had not been put to use.

Ngbea said, “At the inception of the case (COVID 19), we had 100 bed spaces but when I became commissioner, we added 50 beds as back-up.”

But the Delta State Government has yet to open its isolation centres in the state despite the increasing cases of the pandemic.

Out of the six isolation centers in the state, it was gathered that only the one at the Federal Medical Centre, Asaba was operational, but it charged over N100,000 for the treatment COVID-19.Other at Oghara, Warri, Ugheli and Eku have yet to be opened.

Efforts reach the state Commissioner for Health, Dr Mordi Ononye, on the development failed as calls and test messages sent to his phone were not responded as of time of filling this report.

But the Gombe State Commissioner for Health, Dr Habu Dahiru, said the state had over 600 bed spaces in the five isolation centres in the state.

Also, the Ondo State Government said it had no plan to expand its isolation centres across the state.

The Ondo State Epidemiologist, Dr Stephen Fagbemi, said the state had four isolation centres to accommodate patients but none of of the centres has been occupied .

Fagbemi said, “ The state had no plan to expand its isolation centres because currently we have four centres across the state and we have not used up to 20 per cent of the facilities “

On his part, the Lagos State Commissioner for Health, Prof. Akin Abayomi, disclosed that six per cent of the state’s COVID-19 isolation facilities were in use.

The commissioner, on his Instagram handle, @profakinabayomi, on Saturday, said the total bed capacity of the state’s isolation facilities was at 572, adding that 537-bed spaces were still available as of December 24.

Currently, there are two isolation centres in Sokoto State; the Amanawa Leprosy Centre and the Usmanu Danfodiyo University Teaching Hospital.

The state Commissioner for Health, Dr Ali Inname, who disclosed this to The PUNCH, noted that emphasis should be on vaccination as the world had moved away from isolating COVID-19 patients.

The PUNCH had on December 23 reported that there were no fewer than 12, 547 COVID-19 patients on admission at isolation and treatment centres across the country as of December 21.

Meanwhile, the number of officially confirmed COVID-19 infections has hit 236, 014 while the rate of full vaccination has stalled at 3.9 per cent even as the Nigeria Police Force, the military, and other security agencies have failed to enforce the compulsory vaccination mandate for their personnel.

Others who have failed to enforce the vaccine mandate for their personnel include the Federal Road Safety Corps, the Nigeria Customs Service, the Nigeria Correctional Service and the Nigeria Security and Civil Defence Corps.

The Presidential Steering Committee led by the Secretary to the Government of the Federation, Boss Mustapha, had directed that federal workers who had not taken the jab would not be given access to their offices with effect from December 1, 2021.

The PSC had stated that Federal Government workers without proof of vaccination or test results done within 72 hours would be denied access to their offices starting from December 1. The committee had further stated that the directive would be applicable in all locations in Nigeria and missions abroad.

The Office of the Head of Service had nearly four weeks ago begun enforcing the directive by denying civil servants and visitors who did not possess vaccine cards, access to the federal secretariat in Abuja.

Checks by The PUNCH, however, revealed that it was only civil servants at the federal secretariat that were denied access to their offices.

It was learnt that security agencies merely advised their personnel to get vaccinated but did not impose a deadline thereby making the directive optional.

A police officer working at the Police Force Headquarters told The PUNCH on the strict condition of anonymity that the police authorities merely advised personnel to get vaccinated.

The senior officer said, “I have not taken a single dose of the COVID-19 vaccine and I know I am not the only one that has not taken it. There was an advisory that we should get it but it was not compulsory. I don’t even know how they want to enforce it in the police.

“Will the IG direct that suspects who have not taken vaccines should not be allowed to enter police stations? There is no deadline for such vaccination.”

When contacted on the telephone, the Force Public Relations Officer, Frank Mba, said police personnel were taking the vaccines voluntarily, noting that the police management was satisfied with the level of compliance.

Mba further said that all police hospitals and medical centres had been designated COVID-19 vaccination centres to boost the vaccination drive of the government.

For the military, The PUNCH learnt that no deadline was given for personnel to get the jabs although it was compulsory.

The Director, Defence Information, Air Commodore, Wap Maigida said, “Everyone in the military has been mandated to take their vaccine. We have not fixed a deadline for now.”

When asked about the level of compliance to the government directive, the FRSC Education Officer, Bisi Kazeem, said the corps personnel was taking the vaccine, but he was unsure about the enforcement of the vaccine mandate by the corps authorities.

“I don’t think there is any directive from the management that the personnel must take the vaccine but I know that our men have been taking the jabs,” he explained.

Also in a chat with The PUNCH, the Spokesman, NSCDC, Olusola Odumosu, disclosed that the NSCDC CG, Dr Ahmed Audi, had directed that all the men and officers must take the vaccine in line with the government’s directive, adding that the corps boss had also taken his full doses.

“The directive has also been passed down to all the state commandants: compel every personnel to take the jab in line with Federal Government directives to all civil servants. So, we are complying but there is no deadline yet,” Odumosu, a Deputy Corps Commandant said.

The National Public Relations Officer, Nigerian Correctional Service, Francis Enobore, a Deputy Controller of Corrections, explained that the CG of Corrections, Haliru Nababa, had issued a circular to all formations on compulsory vaccination for all NCoS personnel, adding that a deadline had yet to be given on the issue.

Enobore added that the personnel are taking the jab, noting that service was also encouraging inmates to take the vaccine.

He said, “We should be commended for ensuring that no inmate contracted coronavirus since the outbreak due to the enforcement of the stipulated protocols in our correctional facilities. We have already issued a circular directing our men to take the vaccine and I can assure you that they have been complying but there is no deadline on the mandate yet from the management.”

The Nigerian Customs Service said it had directed its staff to take the COVID-19 vaccines but failed to disclose the deadline given for the implementation of this mandate.

“The timeline or deadline is not important, what is important is that we are going to enforce the mandate and all officers must comply.

He added that the failure of Customs officers to comply with the vaccination mandate will attract sanctions as determined by the Service.

“When we say something is mandatory it means that failure to comply will attract sanctions,” Bomodi said.

But the Presidential Steering Committee on COVID-19 said the vaccination mandate for the Federal Government is also binding on the military, police and other security agencies. The Secretary to the PSC, Dr. Muktar Muhammed, disclosed this in an interview with The PUNCH in Abuja.

The PUNCH had also reported how security agents on December 1, enforced the vaccine mandate by making sure that unvaccinated civil servants were prevented from accessing government facilities. However, it was learnt that while security operatives were actively involved in enforcement of the vaccine mandate, the majority of them were not vaccinated.

When our correspondent reached out to Muhammed on whether security operatives were included in the vaccine mandate, He said, “Yes, they are. The vaccination mandate is for all Federal Government workers and it includes all work places”.

Speaking with our correspondent, a Professor of medical virology at the University of Maiduguri, Prof. Marycelin Baba, wondered why security operatives would exempt themselves from the vaccine mandate.

“There is no reason for security operatives to exempt themselves from the vaccine mandate. In fact every Nigerian should be involved. The unvaccinated ones are the distributors of the virus. Police for instance interact with the public a lot, they should be vaccinated so that they will be protected and they will not infect other people.”

The PUNCH reports that several countries had imposed vaccine mandates on security personnel.

On December 13, the United States Air Force announced that it had dismissed 27 service members for refusing to get vaccinated against the coronavirus. ,,