The increased temperature has led to severe impacts on the livelihoods and health of women agriculture workers in Sindh. They face difficulties in breathing, and itching, heat stroke are common health problems among them.

It was the key finding of a study, titled ‘Impact of Rising Temperature on the Health of Women Farm Workers’, recently conducted by the Sindh Community Foundation, a rights-based organisation. 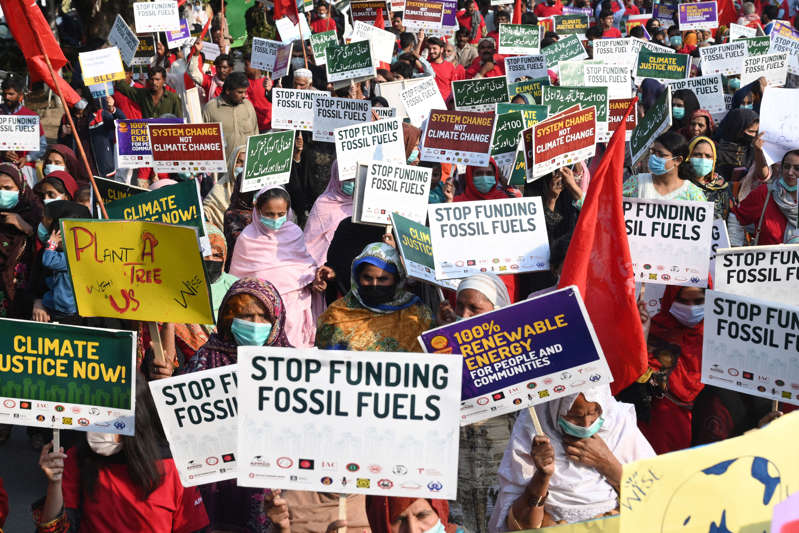 Human rights activists hold placards during a protest in connection with the COP26 UN Climate Change Conference, in Lahore on November 8, 2021. (Photo by Arif ALI / AFP) (Photo by ARIF ALI/AFP via Getty Images)

The study discusses initial evidence of the impact of climate change on human health, specifically women cotton pickers. According to the study, deforestation is one of the leading factors causing the temperature rising in Sindh. Fifteen years ago, Sindh had 2.2 million acres of land, of which 600,000 acres were under forests providing a better source of living to local communities. Sadly, now hardly 15 per cent of this 600,000 acres of forest in Sindh is now katcha (riverine) area, and the rest of the area was utilised for housing, development of infrastructure, and agriculture purposes after deforestation.

Citing the example of Matiari, a district located along the Indus River that once had thick forest and its maximum temperature used to be 42 degrees Celsius in the middle of summer, the study said that during the past five years, the average temperature of the district had increased to 48 degrees Celsius, impacting women agricultural workers’ working capacity during the cotton-picking season.

A number of women cotton workers experienced an increase in temperature and suffered from sunstroke and heat-related health problems, the study said. “There is lack of vegetation and removal of trees from agricultural lands compels them to sit in the open sky even during the break time. The shadow of trees has been reduced in the last 10 years,” reads the study.

“They [agriculture women workers] do not receive any compensation for health problems nor do they get support from their landlords. They have to go to a nearby health facility which [does not have] proper medicine and facilities.”

Health and occupational safety is the right of workers but the law does not cover the agriculture workers, the study found.

They study also revealed that due to locust attack and heavy monsoon falls, and severe pest infestation, production of cotton decreased dramatically and therefore women agricultural workers had been receiving lower wages than the current inflation rate.

The study also mentioned that the poor implementation of related legislation and policy measures such as the Sindh Women Agricultural Workers Act 2020, and Sindh Occupational Safety & Health Act 2017 had exacerbated the effects of climate change on the women agriculture workers. AdChoices