Kathmandu, Dec. 21 — Most local governments have performed poorly in the areas of their jurisdiction due to lack of human resources and necessary expertise, a government survey has revealed. 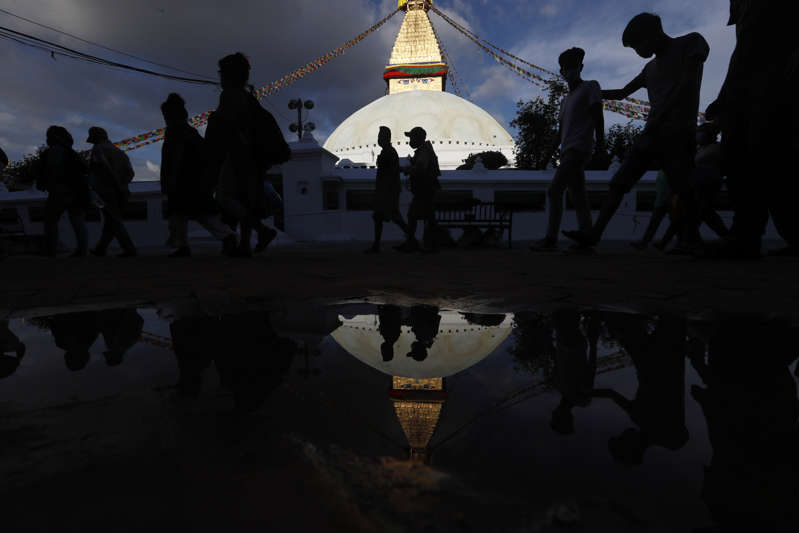 © ASSOCIATED PRESS A reflection of the Boudhanath stupa is seen on a rain water puddle as people walk in Kathmandu, Nepal, Sunday, Aug. 8, 2021. (AP Photo/Niranjan Shrestha)

According to the ‘Study Report on Identification of Local Governments’ made public by the Ministry of Federal Affairs and General Administration on Sunday, many local governments have been unable to deliver services due to a lack of human resources, particularly technical staff.

“One of the reasons behind the delay in implementation of this system is the lack of technical manpower,” said Basanta Adhikari, spokesperson for the Ministry of Federal Affairs and General Administration.

However, only 56 percent of them were found to have prepared such standards.

Even though reports pointed out the lack of capacity as a major factor behind poor performance in a number of areas, there has been little effort to improve the capacity of local governments, chiefly due to staff shortages.

While the federal government failed to send adequate human resources to local units during the staff adjustment process at federal, provincial and local governments, the governments in provinces too were unable to recruit staff through the Provincial Public Service Commission in the absence of Federal Civil Service Act.

According to the report, only 29 percent of local governments had prepared their periodic plans.

One of the areas in which the local governments are expected to work is waste management and environment.

A majority of the surveyed local governments were also found to have done little in the area of waste management.

The report suggests forming a team representing an environmental engineer, and sanitation, technical and administrative staff.

Up to 79 percent of the surveyed local governments didn’t have a separate branch to look after environmental issues.

Only 46.91 percent of local governments implemented the provision of IEE (initial environmental examination) and EIA (environmental impact assessment), according to the report.

But, local governments are supposed to approve IEE/EIA in certain projects that fall under their jurisdiction.

“We have a uniform tax and revenue software which is being used in more than 200 local governments,” said Adhikari. “But we are customising it to enable all 753 local governments to use it.”

The ministry is also working to conduct a nationwide survey to ascertain the needs of local governments.

“This report has given us hints about the needs at the local level. Based on this, we are also conducting another study covering all local governments,” said Gopi Krishna Khanal, national programme director at the Provincial and Local Government Support Programme under the Federal Affairs Ministry.