The African continent on Friday voted with India and other countries to reject an order to create an international probe into Ethiopia’s conflict, exposing the huge positional differences on the year-long war. 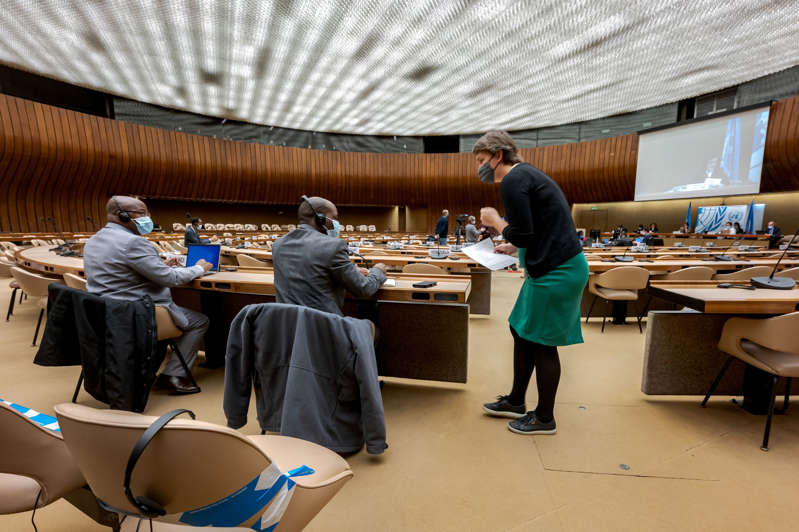 A UN staff (R) speaks with delegates from Burundi during an extraordinary meeting on Ethiopia held mainly remotely at the United Nations (UN) Human Rights Council in Geneva on December 17, 2021. – The United Nations warned that all sides in Ethiopia’s 13-month conflict were committing severe abuses, and cautioned that generalised violence could ensue, with implications for the entire region. (Photo by Fabrice COFFRINI / AFP) (Photo by FABRICE COFFRINI/AFP via Getty Images)

At a special session at the UN Human Rights Council in Geneva, members of the 47-member body endorsed the call by the European Union to create a team of experts to investigate atrocities in Ethiopia, much to the protests by Addis Ababa.

Twenty-one of the 47 members including the UK, Germany, Japan and South Korea endorsed the call, but the entire African representation of 13 members either voted against the draft or abstained.

India and Russia voted against the call, endorsing Ethiopia’s argument that there had been a previous investigation that called for accountability, which the Ethiopian government was willing to implement.  Many of those who voted no have had run-ins with the Human Rights body over alleged interference. For example, Russia too has in the past rejected allegations of violations in crimes.

And India in September rejected criticism by the UN human rights chief Michelle Bachelet of the situation in Jammu and Kashmir, saying her “unwarranted remarks” did not reflect the ground reality. The region had recently seen India impose certain limits to freedoms in what authorities argued was to deal with insecurity.

And Indian External Affairs secretary Reenat Sandhu told the Council at the time India’s approach to global promotion and protection of human rights is based on “our own experience as a pluralistic and inclusive society and vibrant democracy”.

“We believe that promotion and protection of human rights are best pursued through dialogue, consultation and cooperation among states and through provision of technical assistance and capacity building.”

China, which also rejected the call, argued Ethiopia had shown willingness to handle what it called an internal issue. Beijing has in the past refused accusations by the Council of violations in Xinjiang, where its controversial counter-terrorism programme has elicited criticism.

Africa is currently represented by Burkina Faso, Cameroon, Ivory Coast, Gabon, Eritrea, Libya, Malawi, Namibia, Somalia, Senegal, Sudan and Togo. The latter three alongside Malawi abstained. Many of these countries have been fingered for violations.

The proposal first suggested by the European Union through its member Slovakia last week had raised controversy, with Addis Ababa rejecting the special session as meant to push through a political motive of external interference into Ethiopian matters.

Laetitia Bader, the Horn of Africa Director for Human Rights Watch said the move by the Council could help thousands of victims.

“In the face of mounting atrocities affecting Ethiopians throughout the conflict zones, today, the UNHRC (UN Human Rights Council) sided with countless victims whose voices deserve to be heard,” she said, adding that Africa’s opposition to the motion had been a “strong message” on the issue as well.

At the session on Friday, Nada Al-Nashif, the Deputy High Commissioner for Human Rights said incessant violence had led to nearly 90 percent of the population in Tigray facing famine.

Although the EU had been rallying members ahead of the vote to endorse the call, al-Nashif’s comments may have added fuel. The new team of experts is to be appointed by the President of the Council, initially for a year and will be composed of three members.

Ethiopia had argued the team would be unnecessary, but the experts team will now complement work already done by a joint investigation of the Ethiopian Human Rights Commission and the UN Human Rights Office which in October said both the Tigray People’s Liberation Front and the government and allied forces had committed atrocities. It called for accountability, including punishment of perpetrators as well as humanitarian assistance to the civilians.

At the Council, Ethiopia came under attack for its mass arrests which has seen a number of prominent people including journalists detained without charge under the controversial state of emergency policy. Those arrested and detained have been accused of supporting the TPLF, a former ruling party that has since November 2020 been fighting the government.

“We estimate that between 5,000 and 7,000 remain detained, including nine UN staff members,” the UN Deputy High Commissioner for Human Rights told the session.

“Many are detained incommunicado or in unknown locations. This is tantamount to enforced disappearance, and a matter of very grave alarm,” she added.

After the vote, Ethiopia said it will reject the creation of the team.