ISLAMABAD: Pakistan and China on Tuesday signed the Protocol for Inspection and Quarantine Requirements (PIQR) for export of onion likely to open new avenues for Pakistani products in the Chinese markets.

Syed Fakhar Imam, Federal Minister for National Food Security & Research and Nong Rong, Ambassador of Peoples Republic of China in Pakistan, signed this protocol in a ceremony. It was reaffirmed that such initiatives would further strengthen friendship ties between both the countries. 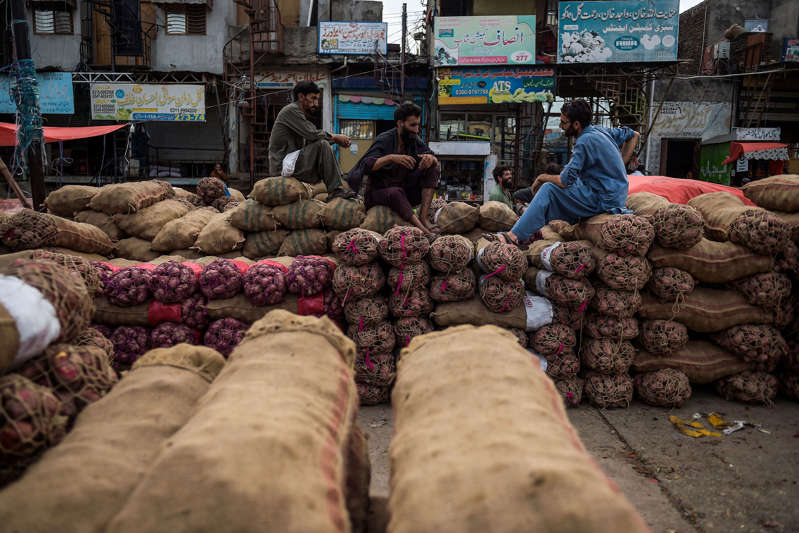 Porters rest on onion and potato bags at a vegetable market on the outskirts of Islamabad on August 19, 2020. (Photo by Farooq NAEEM / AFP) (Photo by FAROOQ NAEEM/AFP via Getty Images)

Such trade related Memorandum of Understandings (MoU) would bring the people of both the countries closer together.

The federal minister highlighted the agricultural sector was indispensable to the country’s economic growth, food security, employment generation, and poverty alleviation particularly for the rural population.

“The present government under Prime Minister Imran Khan has been giving high priority to growth of agriculture sector on sustainable basis and is implementing the most appropriate policies to achieve the desired outcomes.”

The minister said Pakistan had been exporting rice, mango and citrus fruit to China after complying phytosanitary import requirements of China. The instant Protocol would also create awareness about quarantine and phytosanitary compliance among Pakistan onion producers, Imam added.

“China and Pakistan are complementary to each other. China is already supporting Pakistan in Foot and Mouth disease control, chili, potato, and beef and mutton production. The CPEC would further result in such trade ties,” the ambassador said. Work on development quarantine and phytosanitary procedures for export of Pakistani onions to China was initiated by Department of Plant Protection (DPP).

The National Plant Protection Organisations of both the countries conducted Pest Risk Analysis and the technical negotiations resulted in the form of Protocol during April 2021. The protocol was signed through friendly consultations to ensure safe entry of onion from Pakistan to China, to prevent the introduction of pests, and to protect plant health under the provisions of Sanitary and Phytosanitary Measures (SPS Agreement) of the World Trade Organization.

Under this protocol, the DPP would conduct pest survey, implement Integrated Pest Management targeting quarantine pests of concern to China during the growing season of onion by adopting internationally recognised phytosanitary inspection methods and ensure pest-free export of onion to China.

The processing companies that intend to export onions from Pakistan to China shall be registered and recommended by DPP after approval through audit for further registration with General Administration of Customs of China. AdChoices

Pakistan PM allows opening of five new diplomatic missions The News InternationalFormer Intelligence chief: Former Sri Lanka Defence Secretary was informed…Former State Intelligence Chief Nilantha Jayawardena testifying before a Colombo High Court Trial-at-Bar yesterday said that a list of 94 individuals with extremist views had been handed over to then Defence Secretary Hemasiri Fernando in 2017.He was appearing as the first witness in two cases filed by the Attorney General in the Colombo High Court… Daily NewsParty chair firmly in charge as he bids to placate Nepal…Kathmandu, Nov. 24 — Nepal’s main opposition, the CPN-UML, which is also the largest political party in Parliament, is holding its 10th national convention on November 26-28 in Chitwan. The convention is taking place against the backdrop of two key political events that are significant to the party. Three years ago, party chair KP Sharma Oli was l… Kathmandu PostImran to check tax evasion in sugar industry Dawn

SL to auction fuel, gas deposit Daily NewsPakistan, Oman to start ferry service The News InternationalUS to resume talks with Taliban soon AFPTrial begins of 25 men over SL Easter bombings in 2019The trial has begun of the 25 men accused of masterminding the 2019 Easter bombings in Sri Lanka, which killed almost 300 people when churches and luxury hotels were targeted by Islamic terrorist suicide bombers. The lengthy process to reach trial after more than two years has been heavily criticised by families of those killed and the Christian ch… The GuardianHong Kong jails pro-democracy activist Tony Chung BBC NewsPakistan disputes India’s claim that pilot downed F-16 jet Associated PressChina Targets Corporate Backers of Taiwan’s Ruling Party BloombergChina protests US destroyer’s passage through Taiwan Strait Associated PressCricket-Under-strength India still tough ask for visiting New Zealand ReutersIn Peng case, a glimpse into machinery of Beijing’s controlBEIJING (Reuters) – Tennis star Peng Shuai’s sexual assault allegation and its aftermath have brought the realities of China’s censorship and secrecy around its leadership to global attention just as Beijing prepares to host the Olympics. Peng, who was not publicly heard from for nearly three weeks after alleging that former vice premier Zhang Ga… ReutersChinese birthrate falls to lowest since 1978China’s birthrate has plummeted to its lowest level since 1978 as the government struggles to stave off a looming demographic crisis. Data released by China’s national bureau of statistics shows there were 85 births per 1,000 people in 2020, the first time in decades that the figure has fallen below 100. The statistical yearbook, released over the weekend, said the natural rate of population growth – taking in births and deaths – was at a new… The GuardianTaiwan talks chips, Chinese ‘coercion’ in U.S. meeting ReutersChina: Shuai’s case being hyped up BloombergPhilippines accuses China of ‘harassment’ in disputed sea AFPPhilippines navy completes resupply mission after Chinese… ReutersSri Lanka begins trial of 25 accused of plotting 2019 Easter bombings ReutersMyanmar opposition raises $6.3 million on launch of ‘revolution’ bonds ReutersSL ferry capsizes, at least 6 deadCOLOMBO (AP) — A ferry capsized in eastern Sri Lanka on Tuesday, killing at least six people, a navy spokesperson said. Twelve people have been rescued and the search for others is continuing, navy spokesperson Capt. Indika de Silva said. It wasn’t immediately clear how many people were on board the ferry or what caused it to overturn. Four childre… Associated PressCricket: ICC confident all teams will travel to Pakistan for 2025…(Reuters) – India’s participation in the 2025 Champions Trophy in Pakistan is a “challenging” issue for the International Cricket Council but the world governing body said it is confident all teams will travel to the country for the tournament. International sides have largely steered clear of Pakistan since an attack by Islamist militants on the… Reuters

Australian government playing dangerous game over Taiwan – oppositionCANBERRA (Reuters) – The government of Australian Prime Minister Scott Morrison is deploying a “dangerous election tactic” with its comments about joining the United States in any war over Taiwan, the opposition party’s foreign affairs spokesperson said on Tuesday. Australia’s Minister for Defence Peter Dutton earlier this month said it was “inco… ReutersTaiwan says it will respect Honduras vote outcome, warns again on ChinaTAIPEI (Reuters) – Taiwan will respect the outcome of the Honduras election but the country should be aware of getting sucked in by China’s “false” promises, the foreign ministry said on Tuesday ahead of a vote which could see Taipei lose a steadfast ally to Beijing. Honduras is one of only 15 countries that still maintain formal diplomatic ties … ReutersCricket: Bangladesh’s Tamim ruled out of New Zealand tour – report ReutersU.S. warship again transits sensitive Taiwan Strait ReutersQuestions mount over Aukus implications for other nations The GuardianSouth Korean ex-dictator Chun Doo-hwan dies at 90 AFPReport: China has a missile that was thought impossible The IndependentChina to more tightly regulate celebs’ online information Reuters

US sanctions four over Kabul attacksWASHINGTON, Nov 22 (Reuters) – The United States on Monday imposed sanctions on three leaders of Islamic State’s Afghanistan branch and another man it accused of acting as a financial facilitator for the group, in a move that follows a series of attacks in Kabul claimed by the militant group. The State Department on Monday named the group’s emir, S… ReutersMalala Yousafzai says Afghan women’s rights activists evacuation to… The Independent‘Indefensible and deadly’: Government admits Afghan resettlement… The IndependentRed Cross official ‘livid’ over holdups for Afghan aid The HillResumption of India’s COVAX vaccine supply delayed by Nepal -… ReutersUPDATE 1-Pakistan to ensure legislation for central bank autonomy… ReutersFeedback