Kathmandu, Nov. 19 — Vaccination drive against the Covid-19 halted before Tihar has not yet resumed in the Kathmandu Metropolitan City, barring the Pfizer vaccination targeted at chronically ill patients of various ages which started this week at various hospitals. And this is the second time the metropolis has stopped vaccination campaigns after very few people came for immunisation.

“It seems that residents of Kathmandu have already received the coronavirus vaccine,” said Gyan Bahadur Oli, Covid-19 focal person at the Public Health Division of the metropolis. “There is no point continuing the programme, when the vaccine demand seems to have saturated and people are not coming for the jabs.” 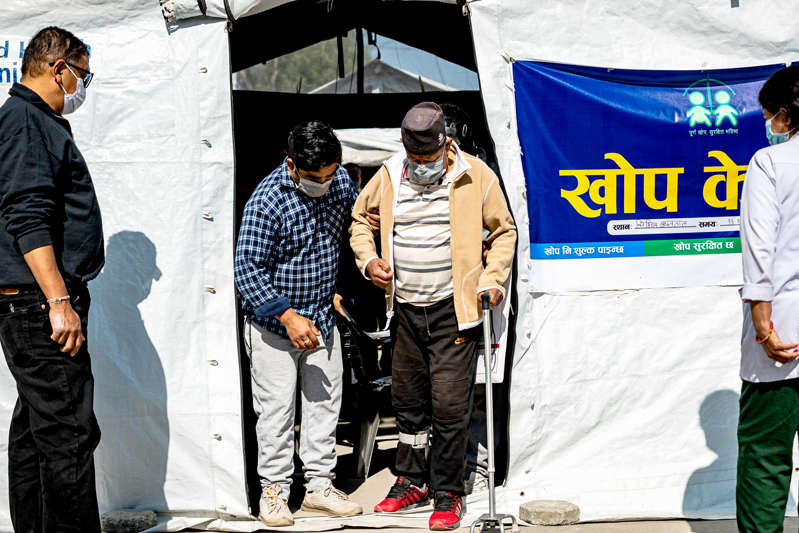 © 2021 SOPA Images KATHMANDU, NEPAL – 2021/11/15: A chronically ill man walks outside the vaccination centre after receiving his first dose of Pfizer-BioNTech vaccine at the Civil hospital. Nepal government has started inoculating the children aged above 17 years and chronically ill people by Pfizer vaccine which was provided by the US government to Nepal through COVAX facility. (Photo by Dipendra Rokka/SOPA Images/LightRocket via Getty Images)

He said that the metropolis will resume vaccination in the coming days targeting the migrant population, which might have returned from villages after celebrating festivals.

Along with the Kathmandu metropolis, several other local units have also halted the vaccination programme, after people stopped seeking vaccination, the Health Office Kathmandu, previously known as the District Public Health Office, said.

Public health experts say that the pace of vaccination will slow down further, as people who are aware of Covid risks have already taken the jabs and authorities have not taken any initiatives to immunise those who have not taken any jab and are also not interested in getting immunised.

And if the pace of the vaccination is not increased it will take another 460 days to administer the jabs to the rest of the population, or around 75 percent of the total population of 30,378,055.

However, the government has committed to administer the jabs to all eligible people by mid-April next year.

According to the data provided by the Ministry of Health and Population, 7,624,038 people (25.1 percent of the total population) have been fully vaccinated, which took around 10 months for the authorities to vaccinate.

Nepal launched its vaccination drive on January 27, becoming one of the first countries to inoculate its population against Covid-19. The campaign was kicked off with an Indian gift of 1 million doses of Covishield, the AstraZeneca type of vaccine manufactured by the Serum Institute of India.

Nepal also paid for 2 million doses, but after supplying half of the order, Serum expressed its inability to deliver the doses citing vaccine shortage in India, which was hit by a second wave. The remaining doses were shipped only recently on October 9.

With the government failing to secure doses, the vaccination campaign was hit hard. However, the campaign resumed after countries like China, Japan, Bhutan and the United States donated doses. Nepal has also received vaccine doses from the Maldives.

Nepal so far has received 23,163,930 doses of Covid-19 vaccines-Vero Cell, AstraZeneca, Janssen and Pfizer-BioNTech-from various sources. The data provided by the Ministry of Health and Population shows that 16,536,009 doses have been administered as of Tuesday.

Of the remaining 6,627921 doses, around one percent have gone to waste, which means there are still around six million doses in stock.

Nepal aims to administer Covid-19 jabs to all eligible people by mid-April next year. It needs to vaccinate around 78 percent of its 30 million population-or around 25 million people, as per the government’s new plan that also includes those aged between 12 and 18 years. The government earlier planned to vaccinate only those aged 15 years and above.

Since around 4-5 million Nepalis are said to be living abroad, around 19-20 million people need to be vaccinated. For this, the country needs a little over 40 million doses of double-shot vaccines.

“Government data shows there are sufficient doses of vaccine in stock, but the vaccine pace is not encouraging,” said Dr Shyam Raj Upreti, chief of the Covid-19 Vaccine Advisory Committee. “If the vaccination pace is not increased, it is not possible to meet the target.”

After a brief setback, Nepal by and large has managed to secure Covid-19 vaccine doses on a regular basis to continue its vaccination campaign. And with some new deals the government has signed, along with the promises to provide the jabs in grants, the country is set to receive enough doses to inoculate the rest of the targeted population.

According to officials, over 34 million doses of different types of vaccines will arrive in the country within two months. Experts say authorities need to focus on proper management and storage while scaling up the vaccination drive not only to meet the target but to manage the doses, set to be supplied in near future.

“Existing vaccine coverage would not be enough to prevent a possible new surge,” said Dr Biraj Karmacharya, an epidemiologist, who is also the chief of Community Medicine Programme at Dhulikhel Hospital, “We should not forget that several countries of Europe and Asia have been witnessing new surge despite having high vaccine coverage rate. Authorities need to pay attention to the sluggish vaccination pace and launch programmes to cover more people.”

A few days ago, the World health Organisation warned that Europe is once again “at the epicenter” of the Covid-19 pandemic. The UN health agency’s Europe head Hans Kluge said the continent could see half a million more deaths by February.

“We should not forget that things had become almost normal after the first wave, but the second wave turned out to be devastating,” said Dr Prabhat Adhikari, an infectious disease and critical care expert. “New cases are declining doesn’t mean we are free of viruses, which is still prevalent in communities. Authorities should ramp up the vaccination pace before immunity gained from natural infection wanes.”

Officials at the Health Ministry concede that the pace of the vaccination hit a snag of late and the risk of infection has not declined.

“Due to major festivals like Dashain, Tihar and Chhath, vaccine pace has slowed down,” Dr Krishna Prasad Paudel, spokesperson for the Health Ministry, told the Post. “A new campaign is needed to increase the vaccination pace.”

After a certain percentage of the population received the jabs, interest to get inoculated at the earliest has declined.

“To meet the target and avoid a possible new surge, we need to speed up vaccination and we also have to increase awareness about the need for vaccination,” said Paudel.

Published by HT Digital Content Services with permission from EKantipur.com.