Over 1,000 people, mostly Tigrayans, detained in Ethiopia in week -UN

GENEVA, Nov 16 (Reuters) – At least 1,000 people, mostly ethnic Tigrayans, have been detained in cities across Ethiopia in the past week, the United Nations said on Tuesday.

Ethiopia declared a state of emergency on Nov. 2, a year after a conflict erupted between the federal government and forces aligned with the Tigray People’s Liberation Front (TPLF), the political party controlling the northern region of Tigray. 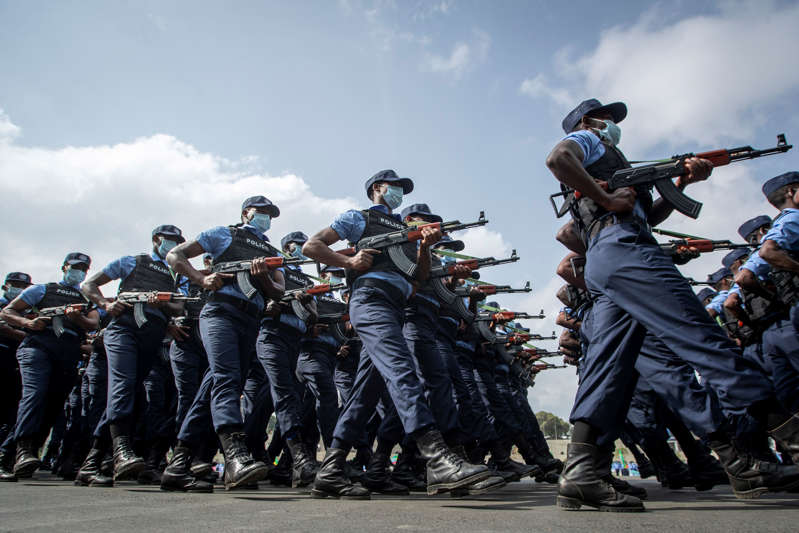 © ASSOCIATED PRESS FILE – In this Saturday, June 19, 2021 file photo, police march during a parade to display new police uniforms and instruct them to maintain impartiality and respect the law during the general election, in Meskel Square in downtown Addis Ababa, Ethiopia. Witnesses say thousands of Tigrayans are being detained by police and their businesses closed in a new wave of ethnic targeting by Ethiopian authorities over the eight-month conflict in the Tigray region. (AP Photo/Ben Curtis, File)

The declaration, which is valid for six months, allows suspects to be detained without trial for as long as the state of emergency lasts and allows house-to-house searches without a warrant.

“At least 1,000 individuals are believed to have been detained over the past week or so – with some reports putting the figure much higher,” the U.N. High Commissioner for Human Rights said in a statement.

“These developments are all the more disturbing given that most of those detained are reported to be people of Tigrayan origin.”

U.N. Secretary-General Antonio Guterres expressed “his concern over reports of arbitrary arrests and detentions, which serve to widen divisions and resentment between groups,” U.N. spokesman Stephane Dujarric said in a statement.

Ethiopian government spokesperson Legesse Tulu did not respond to a request for comment. Police have previously said the arrests are not ethnically motivated but are aimed at detaining supporters of the TPLF.

The conditions in detention centers were poor and overcrowded and many were not told the reasons for their detention, the United Nations said.

Ten U.N. workers also were still being held, after the arrest of 16 last week, the organization said. And 34 contractors remain in detention out of 72 who were arrested last week.

Any Ethiopians working for the United Nations would be held accountable for lawbreaking, the government said Ethiopian staff working for the United Nations or African Union do not live “in space” and will be punished for any lawbreaking, the government said on Thursday, after the arrest of several U.N. employees for unspecified offenses.

Guterres called for the immediate release of detained U.N. staff members, the U.N. statement said. It said U.N. staff were held without charge and there was no specific information provided for the arrests.

The TPLF, which used to dominate Ethiopian politics, accuses the federal government of centralizing power. The government accuses the TPLF of trying to return to its previous dominance. Both are accused of violations that may amount to war crimes, the United Nations has said.

(Reporting by Emma Thomasson; additional reporting by Michelle Nichols at the United Nations; Editing by Angus MacSwan and Grant McCool)

Kenya: Bread, milk and other commodities whose prices have been increased TukoKenyan Justice Juma Chitembwe trashes Mike Sonko videos painting…Justice Said Chitembwe was captured in a video posted online by former governor Sonko in which he allegedly discussed how to compromise a case Chitembwe said he would not step aside to pave the way for investigations, as urged by the Law Society of Kenya (LSK) Nairobi Chapter chairperson Eric TheuriHe also noted that they cannot encourage someone w… TukoRaila assures fair nominationsThe ODM party will be undertaking free and credible nominations as stated by its leader, Raila OdingaRaila has hinted at the outfit using specific criteria to settle on the candidates flying its ticket in various elective postsA group of candidates eyeing a common post will have the option of presenting one of their own to the party delegates ODM l… TukoReligious freedom: US delists Nigeria Reuters

Nigerian gov Udom, Airbus sign deal for 10 new planes LegitNigerian passengers lament as railway workers begin strike, ground… The PunchNigerian Senate passes Real Estate Regulatory Council bill The PunchKenya: Power, car prices likely to riseThe cost of imported goods like cars, electronics and second-hand clothes as well as that of electricity will increase further ahead of the festive season after the shilling fell to a new all-time low of 112.07 units against the dollar. The weakening of the shilling has triggered fears of a fresh round of inflationary pressure, which has become a p… Business DailyWB: Nigeria’s remittance inflow rebounds, hits $17.6BNigeria’s remittance inflow is set to hit $17.6bn and push inflows to Sub-Saharan Africa to $45bn in 2021, a new report by the World Bank has indicated. Remittance inflow to Nigeria was $17.2bn as of December, 2021. The World Bank report, titled, ‘Recovery COVID-19 Crisis Through a Migration Lens: Migration and Development Brief 35’, which was rele… The PunchUS, Kenya call for Ethiopia ceasefire New VisionGunmen kill at least 25 in southwest Niger ReutersTattered US notes become latest street hustle in Zim The GuardianHundreds go missing in Burkina Faso amid extremist violenceFADA N’GOURMA, Burkina Faso (AP) — The last time Polenli Combary spoke to her son on the phone she prayed for God to bless him. Shortly after, she called back but the line was dead. Her 34-year-old son was returning a truck used to move the family’s belongings from their village in eastern Burkina Faso after jihadis forced everyone to leave. He disappeared in March. “We will keep searching … I’m just praying to God to have him back,” said… Associated PressBlinken seeks to cool Africa crisesNAIROBI (AP) — U.S. Secretary of State Antony Blinken opened his first official visit to Africa in Kenya with an appeal Wednesday for the preservation of democracy and inclusion in politically and ethnically fractured societies. His message was delivered amid worsening crises in neighboring Ethiopia and Sudan. With insecurity wracking both of those… Associated PressTiananmen vigil leader invokes Gandhi at Hong Kong sentencing AFPAnother nationwide strike by universities imminent as Nigeria govt gets… LegitBlinken set to hold talks with Uhuru TukoKenya prison break: Detectives suspect wardens dislodged brick… TukoFuel scarcity looms as union issues Nigeria govt 14-day ultimatum, list demands LegitKenya MPs: Could halt UK dealMPs have threatened to shoot down a military cooperation deal between Kenya and the UK until British soldiers involved in the gruesome murder of Agnes Wanjiru in Nanyuki are brought to justice. Defence Cabinet secretary Eugene Wamalwa pleaded with the MPs to ratify the military pact after the existing agreement lapsed in October. He said the new mi… Business DailyFeedback