Globally renowned Swedish activist Greta Thunberg on Friday slammed the COP26 UN climate summit as “a failure” at the first of various protest marches throughout the weekend.

Thunberg labeled the summit in Glasgow to cut emissions “a two-week long celebration of business as usual and blah, blah, blah” during the Fridays for Future march. 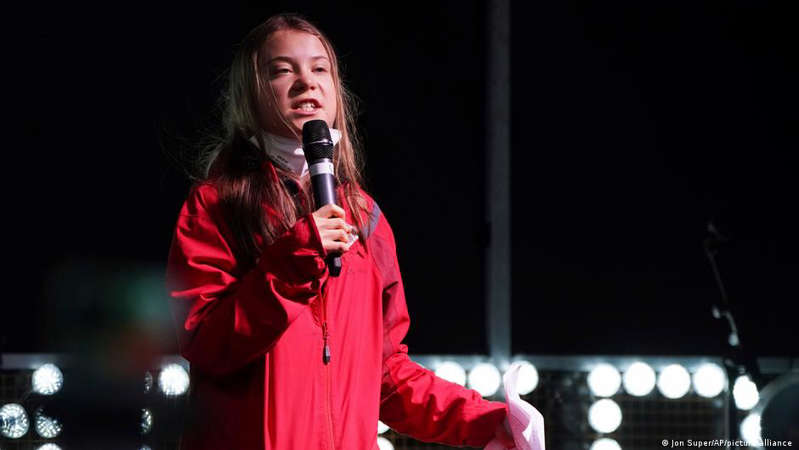 © Provided by dw.com Climate activist Greta Thunberg hit out at the lack of leadership against climate change

What did Greta Thunberg say?

“It is not a secret that COP26 is a failure,” Thunberg told thousands of mainly young protesters that had gathered in the Scottish city.

“This is no longer a climate conference. This is now a global greenwashing festival.”

She hit out at delegates from 200 countries who had got together to work out how to meet the goals of the Paris Agreement to limit climate change across the globe.

“Our leaders are not leading. This is what leadership looks like,” she said, pointing to the crowd.

The founder of Fridays for Future said leaders of the global north seemed to be trying to prevent any real change.

“They are actively creating loopholes and shaping frameworks to benefit themselves and to continue profiting from this destruction,” she said. “We need immediate drastic annual emission cuts unlike anything the world has ever seen.”

What’s been achieved so far?

The COP26 started with real hope as over 100 countries committed themselves to cutting emissions by at least 30% this decade.

But environmental groups doubted the pledge, suggesting that especially richer countries often fail to live up to their promises.

The UN estimated that under the proposed climate action plans the earth would warm up by 2.7 degrees Celsius this century.

“Youth have brought critical urgency to the talks,” Greenpeace International Executive Director Jennifer Morgan said. “They have emphasized what is at stake for young people if the gap to 1.5 C is not closed.”

“World leaders are obviously scared of the truth, yet no matter how hard they try, they cannot escape it,” 18-year-old Thunberg said. AdChoices

Bulgaria’s GERB party leads ahead of Nov. 14 election- survey ReutersNew infections record as Russia’s COVID-19 wave persists Associated PressAttack on German train hurts manyGerman Federal Police on Saturday said there was a knife attack on a train in the southern German state of Bavaria resulting in several injuries. The train was travelling near Neumarkt between the cities of Regensburg and Nuremberg at the time of the attack. Bild newspaper said three people were injured, two seriously. The attacker has been arreste… dw.comPeace envoy: Bosnia’s disintegration to affect regionBERLIN (Reuters) – If a multi-ethnic Bosnia is pushed towards disintegration, that will inevitably have an impact on other unresolved conflicts in the Western Balkans such as that between Serbia and Kosovo, Bosnia’s peace envoy told Reuters on Saturday. German politician Christian Schmidt, who is international High Representative in Bosnia, said … Reuters

France plans to cancel Sudan debtPARIS (Reuters) – France said on Friday the coup in Sudan had put into question the process that would have seen France cancel some $5 billion debt it was owed by the African country. “It is clear that the strength of the coup of October 25 by the military puts this process into question,” Foreign ministry spokeswoman Anne-Claire Legendre told re… ReutersMadagascar paying price for cheap European flights, says climate… The GuardianEurope relapses as Covid hot spot BloombergBritain allows early booking of booster shots to speed up rollout Reuters

Bosnian doctors brace for new wave as virus rages in regionBANJA LUKA, Bosnia-Herzegovina (AP) — Watching with fear as the coronavirus rages in neighboring countries, doctors in Bosnia are bracing for a new wave in the Balkan nation, which has a low vaccination rate and has been among the hardest hit countries in Europe earlier in the pandemic. In the northwestern town of Banja Luka, staff in the COVID-19 … Associated PressCzech govt OKs monthly wage risePRAGUE (Reuters) – The Czech government has approved a rise in the minimum gross monthly wage by 1,000 crowns to 16,200 crowns ($739) from January, Deputy Prime Minister Karel Havlicek told Reuters. The minimum wage is paid to about 150,000 of the country’s four million employees, but it is also used as a benchmark to determine higher wages in a … ReutersUK probe into French trawler tragedy set to release findingsA British coroner will on Friday deliver the conclusions of his inquest into the 2004 sinking of a French trawler in UK waters, which killed five people. The French justice system, after years of investigations that delayed the full British hearing, said in 2016 it was unable to reach a definitive conclusion. AFPIohannis delays nomination of PMRomania’s president Klaus Iohannis will delay the consultations with parliamentary parties for nominating a new prime minister until a new majority is formed in the Parliament. “It is very clear that attempts to form minority governments have not yielded results, and therefore I cannot continue to accept such approaches. In conclusion, I will wait … Romania InsiderGlobal food prices hit fresh 10-year high, UN saysGlobal food prices have hit the highest level in over a decade after rising by more than 30% in the last year, the United Nations Food and Agriculture Organization (UNFAO) says. The agency’s figures highlighted the soaring cost of cereals and vegetable oils around the world. Vegetable oil prices hit a record high after rising by almost 10% in Octob… BBC NewsBritain ‘tracked’ China submarines Sky NewsRussia wins latest round of $50-bn Yukos case AFPGerman president praises Norway’s response to terror attacks dw.com

China warns EU over Taiwan The IndependentEurope virus spike: WHO raises alarmThe top World Health Organization (WHO) official in Europe said on Thursday that the rate of COVID-19 transmission on the continent is of “grave concern.” “The current pace of transmission across the 53 countries of the European Region, is of grave concern,” Regional Director Hans Kluge Kluge said while briefing reporters on COVID-19 numbers in Eur… The HillUN: Countries failed to adapt for climate damageExtreme weather driven by climate breakdown is hitting the world “with a new ferocity”, the UN has warned, but countries have so far failed to prepare for the widespread damage that is now inevitable even if greenhouse gas emissions are reduced. Developing countries are particularly at risk, but they are unable to muster the cash needed to defend p… The GuardianPoland: Belarusian soldiers threatened to fire at troopsWARSAW, Nov 4 (Reuters) – Belarusian soldiers threatened to open fire on Polish troops just across the border, the Polish Defence Ministry said on Thursday, in what it said was an attempt to escalate a crisis over migrants at their common frontier. Warsaw and the European Union accuse Belarus of deliberately encouraging illegal migrants to enter Po… ReutersRussia sets new virus death recordMOSCOW (AP) — Russia has set another record for daily coronavirus deaths as it struggles through a long surge of infections that has prompted restrictions throughout the country. The national coronavirus task force on Thursday said 1,195 people died of COVID-19 over the past day, exceeding the 1,189 recorded the previous day. Since late September, … Associated PressCzech President Zeman’s condition improves, leaves intensive care unit ReutersNuclear rift at climate talks Associated PressHungary: Jump in daily Covid casesBUDAPEST, Nov 4 (Reuters) – Hungary reported a jump in daily COVID-19 infections to 6,268 on Thursday, with the daily tally more than doubling from the middle of last week in a country with hardly any restrictions to curb the spread of the coronavirus. A new wave of COVID-19 has swept across Central Europe, where vaccination rates are below the Eur… ReutersFeedback