BUCHAREST, Oct 23 (Reuters) – The Romanian government will re-introduce a night curfew and make health passes mandatory for entry to most public venues from Monday, as well as sending school children on vacation for two weeks, as it seeks to stem a surge in COVID-19 cases and deaths. 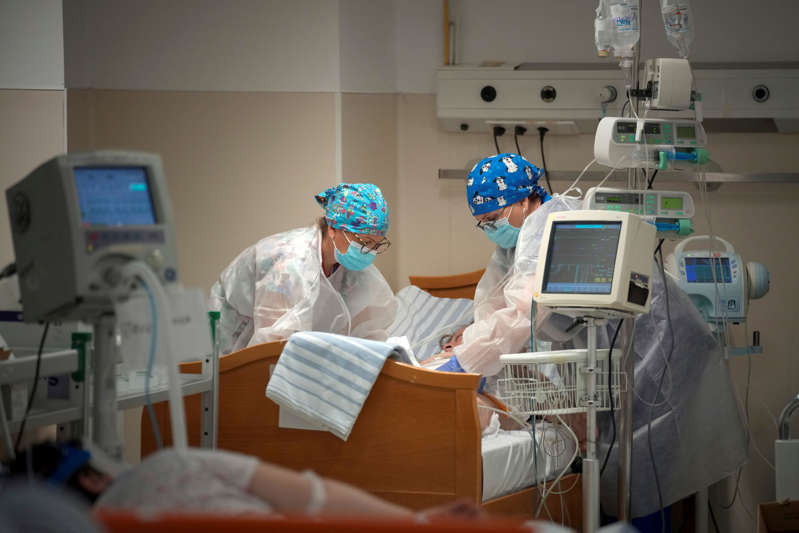 © ASSOCIATED PRESS Members of the medical staff attend to a patient in a COVID-19 isolation room at the University Emergency Hospital in Bucharest, Romania, Friday, Oct. 22, 2021. In Romania, a European Union country of around 19 million, only 35% of adults are fully inoculated against COVID-19 compared to an EU average of 74%.(AP Photo/Vadim Ghirda)

The measures, expanding nationwide measures that had mostly already been taken in towns with high case numbers, were approved by the interim government late on Friday.

Romania has reported record numbers of daily coronavirus deaths and infections this month and the hospital system is stretched to breaking point. The country has the second-lowest coronavirus vaccination rate in the European Union.

“We are in a disaster situation,” deputy Interior Minister Raed Arafat said on Friday. “We have seen other countries go through this when there wasn’t a weapon available, namely the vaccine.”

“We are in this situation while having the vaccine, because the majority of us refused to get inoculated. This situation could have been avoided.”

The new measures will be in force for 30 days and include restrictions on the movement of people from 10 p.m. and shutting down shops and restaurants from 9 p.m.

Only people who have been vaccinated or who have recovered from the virus will be allowed access to most non-essential public venues except food shops and pharmacies. Religious services can also operate without a pass.

Wearing facemasks in public places will become mandatory from Monday, while weddings and other private events are banned.

The government is also urging employers to send half their staff to work from home.

Just over a third of the adult population is fully vaccinated in Romania, amid distrust in state institutions and misinformation campaigns.

But vaccinations were on the rise this week, with people apparently responding to dramatic news images of overcrowded hospitals and people dying. On Friday, more than 86,000 people got their first vaccine dose, a record for a single day in the country. (Reporting by Luiza Ilie Editing by Frances Kerry) AdChoices

New Zealand trade deal is ‘disgrace’, says UK government climate… The IndependentRussia, China ships hold joint patrols ReutersImmigration: EU seeks compromiseBRUSSELS (Reuters) – European Union leaders made a fresh effort on Friday to overcome their differences on how to handle immigrants, but disagreed on the best way forward, with the head of the bloc’s executive saying there would be no EU funds for ‘barbed wire and walls’. While total immigration numbers are low compared to the bloc’s population o… ReutersMoldova: Russia gas talks dividedCHISINAU, Oct 23 (Reuters) – Moldova and Russia remain divided over price and other details of a new gas deal, Prime Minister Natalia Gavrilita said on Friday, after expiry of their former pact prompted Chisinau to declare a state of emergency over energy shortages. Two Moldovan deputy prime ministers travelled to Moscow this week after the previou… Reuters

Covid testing failures at UK lab ‘should have been flagged within days’Health officials should have known about major failings at a private Covid testing lab within days of the problem arising, rather than taking weeks to shut down operations at the site, senior scientists say. About 43,000 people, mostly in south-west England, are believed to have wrongly been told they did not have the virus by Immensa Health Clinic’s laboratory in Wolverhampton in a debacle described as one of the worst scandals in the UK’s… The GuardianGermany sees new refugee arrivals via Poland, Belarus dw.comSecrecy shrouds Afghan refugees sent by US to base in Kosovo Associated PressPoland protests mark one year since abortion ban dw.comMerkel says German politics needs more women; don’t ask about her blazers! ReutersBiden, Macron talk European defenseUS President Joe Biden and French President Emmanuel Macron discussed strengthening European defenses in a telephone call Friday, the White House said, as Washington seeks to mend ties after a bitter row over submarine contracts. The two leaders “discussed efforts to enable a stronger and more capable European defense while ensuring complementarity… AFPFrance and Israel hold ‘secret’ talks to defuse phone spyware rowA top adviser to the French president, Emmanuel Macron, has met with his Israeli counterpart to discuss the alleged targeting of French ministers by a client of NSO Group, the Israeli spyware maker. A row over the alleged surveillance has been described as a “major diplomatic headache” for the government of Naftali Bennett, the prime minister of Israel. The “secret” meetings at the Élysée Palace were first reported by the news website Axios and… The GuardianEU leaders give Merkel an ovation at final summit BBC NewsSupply chain woes put brakes on Europe’s top cycle-makers in Portugal AFPFreedom of speech on the line in ‘New Uzbekistan’ AFPEU seeks to halt migrant crossingsBRUSSELS (AP) — European Union leaders met Friday to discuss migration to the bloc and how to stop the influx of refugees arriving via neighboring Belarus. EU members Poland and Lithuania have been struggling to cope with an unusually high number of migrants arriving at their borders with Belarus in recent months. The EU is accusing President Alexa… Associated PressInside the Covid situation in EuropeItaly On October 15, Italy imposed the toughest vaccination requirements in all of Europe. All employees must now show a “green pass” indicating that they have been vaccinated, have recently recovered from infection or have tested negative in the past 48 hours. Anyone wanting to eat out or spend time in public spaces like the movies must also show … dw.comMinister: Romania could see over 20K Covid cases per day Romania InsiderRussian jets buzz Alaska airspace NewsweekBosnia’s Serb leader unveils bid to dismantle ‘failed’ state AFPCOVID-19: Belgium, Austria join Romania’s red travel list Romania InsiderRussia: Deadly fire at plant kills many dw.comAmnesty seeks COVID-19 inquiry into Italian nursing homesROME (AP) — Amnesty International called Friday for an independent parliamentary inquiry into COVID-19 deaths in Italian nursing homes and reports of retaliation against nursing home staff who spoke out about unsafe conditions there. Amnesty based its findings on interviews with 34 health care workers, as well as union leaders and lawyers. A third of the workers “raised concerns about a climate of fear and retaliation in their workplace,” the… Associated PressRomania’s reformist party USR ‘not comfortable’ with PM-designate CiucaThe appointment of a former military as prime minister-designate “does not bode well” for the credibility of the politicians and “is not a good sign,” said the president of Romanian reformist party USR, Dacian Cioloş. He pointed to the vaccination campaign, which has been conducted from the very beginning by colonel Valeriu Gheorghita, and “we… Romania Insider

Deaths in Poland as Storm ‘Aurore’ wreaks havoc across Europe dw.comHow Belarus is helping ‘tourists’ break into the EUBelarus has been accused of taking revenge for EU sanctions by offering migrants tourist visas, and helping them across its border. The BBC has tracked one group trying to reach Germany. The mobile phone camera pans left and right, but no-one moves. The exhausted travellers lie scattered among the trees. Jamil has his head in his hands, his wife Ro… BBC NewsSaudi FM discusses Iran nuclear talks with EU envoy -statement ReutersPutin says Western military backing of Ukraine threatens Russia ReutersRussia mulls to delist Taliban from extremist groups ReutersRussia warns NATO on Ukraine NewsweekMan charged over stabbing of UK MP Evening StandardIohannis picks Ciuca to be PM Romania Insider

Are we safe? Killing of UK lawmaker makes colleagues nervousBy Elizabeth Piper and Kylie MacLellan LONDON (Reuters) -Last week, British lawmaker Christian Wakeford opened his office door in the market town of Radcliffe to a passer-by who wanted to talk about the area’s regeneration. A day later, Wakeford said, he would not have let the man straight into his office. What had changed was that a day after Wake… ReutersExclusive – EU decision on Russia’s Sputnik V shot ‘impossible’ this year -…By Emilio Parodi and Polina Nikolskaya (Reuters) – The EU drug regulator is unlikely to decide whether to approve Russia’s Sputnik V coronavirus vaccine until at least the first quarter of 2022 because some data needed for the review is still missing, a source with knowledge of the matter said. “An EMA decision by the end of the year is now absol… ReutersRomania to go under tight curfewAll pupils in Romania will go on vacation for two weeks, starting Monday, October 25. The access to most activities will be allowed only based on the green Covid certificate, night quarantine will be established for non-vaccinated people, and the mask will become mandatory in all public areas. The new restrictions were announced on Wednesday, … Romania InsiderAfghans evacuated to Germany face legal uncertainty dw.comRegional powers call for Afghan aid The Hill