MOSCOW (AP) — Russia is reporting a record high number of coronavirus infections and COVID-19 deaths as the country approaches a week of nonworking days aimed at stemming the sharp surge in cases.

The national coronavirus task force said Saturday that 1,075 people had died from the virus in the past day and that 37,678 new infections were tallied — the largest single-day numbers of the pandemic.

The daily death toll is about 33% higher than that recorded in late September and infection cases have risen by about 70% in the past month.

Only about one-third of Russia’s 146 million people have been vaccinated, frustrating officials and placing a strain on the country’s health-care system.

Facing widespread resistance to vaccination, President Vladimir Putin has responded to the worsening situation by ordering Russians to stay away from work between Oct. 30 and Nov. 7.

© Provided by Associated Press Medical staff in special suits treat a COVID-19 patient at an ICU in Infectious Hospital No. 23 in Nizhny Novgorod, Russia, on Wednesday, Oct. 20, 2021. Russians’ hesitancy in getting the vaccine is of increasing concern as the country suffers a sharp rise in cases, setting records for infections and deaths nearly every day this month. (AP Photo/Roman Yarovitcyn)

Many regions are imposing additional restrictions, including closing gyms, theaters and sit-down service at restaurants or restricting them to customers who can show QR codes confirming that they are fully vaccinated.

Overall, Russia has recorded about 8.2 million cases of coronavirus infection and 229,528 deaths, according to the task force. However, that toll counts only deaths attributed directly to the virus; the national statistics service Rosstat has reported tens of thousands of deaths in which the virus was considered to be a contributing factor.

Russia was the first country in the world to authorize a coronavirus vaccine, launching Sputnik V in August 2020, and has plentiful supplies. But uptake has been slow, blamed in part on conflicting signals from authorities.

While extolling Sputnik V and three other domestic vaccines, state-controlled media often criticized Western-made shots, a message that many saw as feeding doubts about vaccines in general. 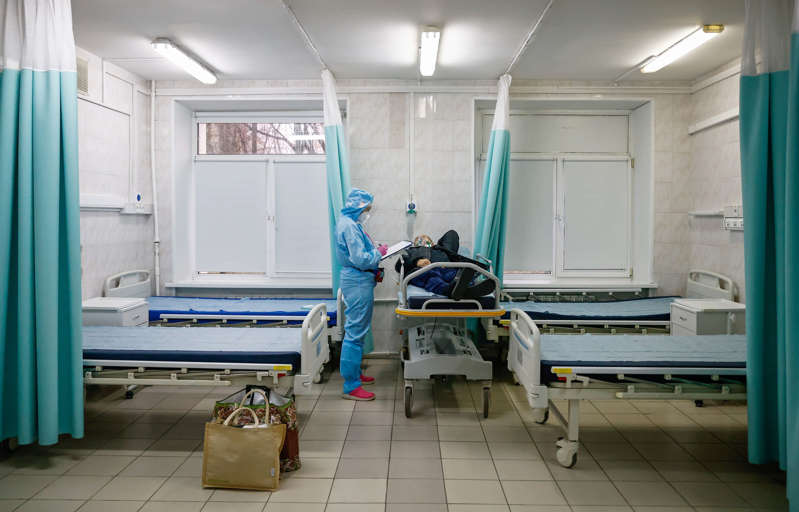 © Thomson Reuters A medical specialist takes care of a patient at the City Clinical Hospital Number 52, where people suffering from the coronavirus disease (COVID-19) are treated, in Moscow, Russia October 21, 2021. REUTERS/Maxim Shemetov

Putin has deplored Russians’ vaccine hesitancy, saying that “there are just two options for everyone — to get sick, or receive a vaccine. And there is no way to walk between the raindrops.”

Asked if Russia could make vaccines mandatory, Putin said this week he believes they should remain voluntary. AdChoices