The New Nation 5 hrs agoLikeElon Musk confirms he and Grimes are ‘semi-separated’Myanmar will not address world leaders at U.N., Afghanistan will

Prime Minister Sheikh Hasina today demanded appropriate global action for “universal and affordable” vaccine access to all for COVID-free world in her 76th UN General Assembly (UNGA) address warning that the current “vaccine-divides” trend would only linger the pandemic. 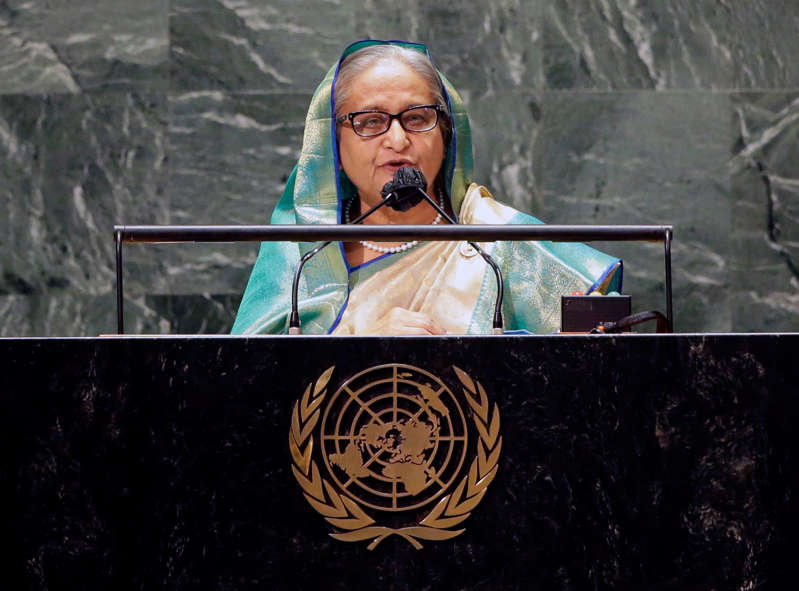 “For a COVID-free world, we must ensure universal and affordable access to vaccines for people across the world,” she told in her UNGA address in Bangla as previous years, following Father of the Nation Bangabandhu Sheikh Mujibur Rahman’s footprint.

The premier also expressed her grave concern over growing trend of “vaccine divides” pointing out World Bank reports suggesting high and upper middle-income countries received so far 84 percent of vaccines against less than one percent by low-income countries.

“This vaccine inequality must be urgently addressed … we cannot chart out a sustainable recovery and be safe by leaving millions behind,” she said, demanding a UN declaration calling COVID-19 vaccines as a “global public goods” in the weeklong UNGA general debate that began on September 21.

She said the last 75th UNGA remained largely unheeded although many countries echoed the same but “we must demonstrate our ability to work and act together on global common issues and create space for new partnerships and solutions”.

“And that must start right here at the UN; with the member states; across regions; rising above narrow political interests. . . it has also put a spotlight on the critical need for global solidarity and collaboration to effective COVID-19 response,” the premier said.

Sheikh Hasina said vaccine technologies must be transferred immediately across the globe to ensure vaccine equity, saying, “Bangladesh is ready to produce vaccines in mass scale if technical know-how is shared with us and patent waiver is granted”.

She placed several proposals to contain the global pandemic, saying

only a meaningful collaboration towards a resilient and inclusive

recovery could combat the pandemic though it so far brought to the fore the inadequacy of the global response to tackle emergencies.

Bangladesh’s permanent representative to the United Nations Rabab Fatima chaired the session coinciding with the prime minister’s address in the UNGA where 100 heads of government and state were speaking in person.

She said alongside Bangladesh calls for vaccine equality, “Our firm position against any form of injustice as against the Palestinian people, resolution of the Rohingya crisis, and promoting climate justice – (which) are a few examples of our global commitment”.

On the Afghan crisis, she said Bangladesh wants Afghanistan’s people to decide the course of the future themselves while Bangladesh is ready to continue to work with international community for the country’s economic development.

The prime minister said “Hope” being the theme of the 76th UNGA when COVID-19 was claiming lives across the globe and battering the economies and health system across the world by recurring waves of new variants.

She pointed out that the pandemic disproportionately impacted the climate vulnerable countries that need to be addressed with immediate measures and “otherwise, devastating impacts of climate change will be irreversible”.

“No country, rich or poor, is immune from the destructive effects. We, therefore, call upon the rich and industrialized countries to cut emissions, compensate for the loss and damage, and ensure adequate financing and technology transfer for adaptation and resilience building,” she said.

Sheikh Hasina, also the Chair of the Climate Vulnerable Forum and the Vulnerable Twenty Group of Ministers of Finance, said her government has launched the “Mujib Climate Prosperity Plan – Decade 2030” outlining a transformative agenda from climate vulnerability to climate prosperity.

She went on saying that the upcoming COP-26 Summit in Glasgow provides us with a good opportunity to rally support for such new and inclusive ideas, adding, “Let us not miss out on this opportunity.”

Outlining the COVID challenges like other parts of the globe, Sheikh Hasina said the pandemic also severely disrupted Bangladesh’s education system while UNICEF reported that half the world’s students were affected by partial or full school closures.

“We need a global plan to prioritize education recovery by investing in digital tools and services, access to internet, and capacity building of teachers. We also call the UN system to rally partnership and resources to make that happen,” she said.

Sheikh Hasina, however, said Bangladesh largely managed to be on track for its graduation from the Least Development Countries (LDC) category “despite the unprecedented challenges by the COVID-19 pandemic”.

But, she said, the pandemic still risked the graduation prospect and aspiration of many countries and so “we look forward to receiving more support from our development partners for an incentive-based graduation structure”.

As one of the co-chairs of the Preparatory Committee of the LDC 5 Conference, the premier sought “concrete outcome” of Doha conference enabling more countries to sustainably graduate out of the LDC category.

Sheikh Hasina described migrants’ workers as frontline contributors during the pandemic in health and other emergency services and urged the migrant receiving countries to treat them fairly and protect their jobs, health, and well-being.

She said the pandemic hit hard many migrant workers throwing them out of jobs and exposing them to salary cuts, lack of access to health and other social services and forcible return.

The Prime Minister wanted the global community’s enhanced focus and active support to find a durable solution to the Rohingya crisis despite the uncertainty created by the recent political developments in Myanmar.

She said the Rohingya crisis was passing its fifth year now but “yet not a single forcibly displaced Myanmar national could be repatriated — I would like to reiterate that the crisis was created in Myanmar and its solution lies in Myanmar”.

“Myanmar must create the conditions conducive for their return,” Sheikh Hasina said.

But, she added: “International community must work constructively for a permanent solution of the crisis through safe, sustainable, and dignified return of the Rohingyas to their home in the Rakhine State.

The premier particularly expected the ASEAN leadership to step up their ongoing efforts alongside the rest of the international community to support all the accountability processes.

She said her government recently relocated some Rohingyas to an offshore island of Bhashan Char “on our part, to ensure their temporary stay in Bangladesh”.

The premier said despite vaccine constraints the Rohingyas were incorporated under Bangladesh’s inoculation campaign to stop spread of COVID-19 in their camps.

Sheikh Hasina said the Covid-19’s impact on Bangladesh was much less than it was feared as was equipped and strengthened from the grassroots to combat the pandemic.

She said under a multi-pronged and multi-stakeholder approach, Bangladesh took some firm decisions to balance between life and livelihood from the very beginning of the pandemic that included 28 stimulus packages to the tune of US$ 14.6 billion or 4.44 percent of the GDP to keep our economy afloat.

Sheikh Hasina said her government also allocated $ 1.61 billion for vaccines in the current budget cycle giving an extra attention to the most vulnerable people like the ultra-poor, disabled, elders, returnee migrants and vulnerable women.

She said some 40 out of Bangladesh’s over 160 million populations were covered under the assistance in the form of cash and other means since the pandemic’s outbreak.

“Our well-timed intervention and our people’s resilience helped us achieve over five percent economic growth in 2020,” Sheikh Hasina said.

The premier’s UNGA speech largely featured the contemporary global issues including the Afghan crisis, saying, “We firmly believe that it is bested upon the people of Afghanistan to rebuild their country and decide the course of the future themselves”.

“Bangladesh stands ready to continue to work with the people of Afghanistan and the international community for its socio-economic development,” she said.

The premier said “peace” was a pre-eminent focus of Bangladesh foreign policy and as a proponent of the flagship resolution of the Culture of Peace, Bangladesh remained deeply committed to combat terrorism to maintain social peace.

She said as precautions Bangladesh continued to spearhead a “zero tolerance policy” against terrorism and violent extremism as the menaces were jeopardizing peace and security in many parts of the world.

Bangladesh, she said, “Also takes pride as the leading peacekeeping nation and our contribution to global peace and despite the pandemic, our peacekeepers are serving in some of the most difficult circumstances across the globe with utmost dedication and professionalism”.

“The international community must do everything possible to ensure their (peacekeepers) safety and security,” she said.

Sheikh Hasina said Bangladesh’s constitution obligates the country to be steadfast supporter of complete disarmament and “we firmly believe the ultimate guarantee of international peace and security lies in the total elimination of nuclear weapons and other weapons of mass destruction”.

“It was from that conviction we ratified the Treaty on the Prohibition of Nuclear Weapons (TPNW), which entered into force earlier this year,” she said.

The Prime Minister said Bangladesh’s founder Bangabandhu called for building a world free of economic inequalities, social injustice, aggression, and threats of nuclear war and told the session that she joined the 76th UNGA coinciding with his Bangabandhu’s birth centenary and golden jubilee of 1971 independence celebrations.

She added: “These are as relevant today as they were forty-six years ago, as such, we continue to lend our voice and leadership to all those issues that aim at building an inclusive and equal society.”

The Prime Minister said her government has been working hard to fulfill the unfinished dream of our Father of the Nation.

“We are now among the five fastest growing economies in the world, ranking 41st in terms of GDP. Over the past decade, we have reduced the poverty rate from 31.5%to 20.5%,” she said.

Sheikh Hasina said Bangladesh’s per capita income jumped to more than threefold in just one decade to USD 2,227 while its foreign currency reserve has reached all time high to USD 48 billion.

She said Bangladesh made impressive progress in socio-economic sphere and women empowerment during last decade adding that the infant mortality rate has been reduced to 23.67 per 1,000; maternal mortality rate to 173 per 100 thousand live births; and the average longevity of people rose to 73 years.

She pointed out that the World Economic Forum (WEF) ranked Bangladesh in 7th position regarding women’s political empowerment of women Bangladesh, much ahead of its regional neighbors since 2014.

She said, “Massive investments in women’s advancement and empowerment have contributed to our transformative development.”

“We have achieved the milestone of LDC graduation this year. Our vision is to transform Bangladesh into a knowledge-based developed country by 2041; and a prosperous and resilient Delta by 2100,” she added. AdChoices