The Government last week enacted Emergency Regulations in a bid to arrest the spread of the Delta variant of the Coronavirus which continues to pose significant challenges in the form of increasing numbers of persons being infected with the virus with some of them succumbing to the illness.

The daily death toll from the virus hovers around 180-200 now and the total number of deaths has surpassed the 10,000 mark. Of greater concern is the fact that most of these have occurred during the current wave of infections, with experts predicting this trend to continue for some time to come. 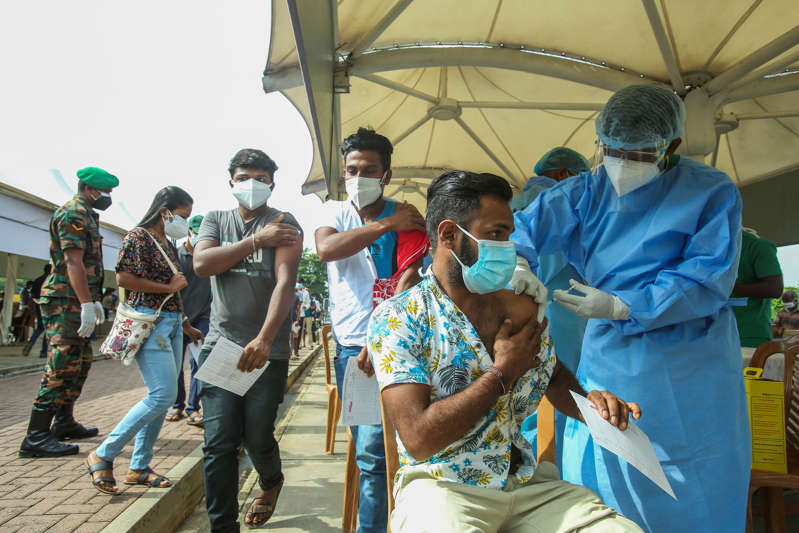 © Xinhua News Agency.All Rights Reserved A man receives the COVID-19 vaccine in Colombo, Sri Lanka, on Sept. 6, 2021. The death toll from the COVID-19 pandemic in Sri Lanka surpassed the 10,000 mark on Monday, reaching 10,140, after 189 more deaths were reported, official figures from the health ministry showed here. (Photo by Ajith Perera/Xinhua via Getty Images)

Medical experts have also noted that some patients who are infected with the Coronavirus seemingly make a recovery only to develop complications later which can be potentially life threatening or even fatal. This is called “Long COVID” and scientists and medical specialists are studying this phenomenon. “Brain Fog” is among the symptoms of “Long COVID”. Patients are now being urged not to exert themselves soon after recovering from the infection.

These comments come as the pandemic claimed the life of popular veteran musician Sunil Perera (68), leader of the pop band ‘Gypsies’. Sunil Perera also returned home to convalesce from the infection, only to develop complications a few days later. He passed away after being re-admitted to a private hospital.

Previously, former Foreign Minister Mangala Samaraweera also suffered a similar fate. He too apparently recovered from the initial infection and had spoken to many friends afterwards, discussing his plans to return home. However, he passed away after suffering from a sudden heart attack a few days later.

“Patients who have recovered from COVID-19 have been advised not to over-exert and do strenuous exercises. They need to be careful for a few weeks before they can return back to their normal routines,” a medical expert said, describing the “Long COVID” syndrome.

Emergency Regulations enacted by the Government enable the efficient distribution of essential food items to the public. The Regulations were passed by Parliament with 132 votes for and 51 against. Opposition Parliamentarians who voted for the 20th Amendment voted for the regulations.

UNP Leader MP Ranil Wickremesinghe was not present in the Chamber at the time of voting.In a more positive trend, the number of oxygen-dependent patients infected with the Coronavirus has declined, the Deputy Director General of Health Services Dr. Hemantha Herath said. The country is still able to cope with the demand for Medical Oxygen even if these numbers increase again, Dr. Herath said.

The Regulations attracted some criticism from the opposition with Janatha Vimukthi Peramuna (JVP) leader Anura Kumara Dissanayake claiming that the Emergency Regulations were not essential to ensure adequate distribution of food and that normal laws were sufficient. The Consumer Affairs Authority (CAA) Act could be used instead, he said.

“Raids on sugar and rice storages were also conducted under the provisions of the CAA Act. Declaring Emergency Regulations was not required for any of these measures,” Dissanayake said. The Regulations will now confer extra powers on the President which are not required, he argued.

Minister of Agriculture Mahindananda Aluthgamage however disputed this. The CAA Act lacks provisions to impose stringent penalties, he pointed out. Enacting emergency regulations was done only for the purpose of providing essential goods at a concessionary price to the public, he said.

Also in Parliament was a supplementary estimate presented by the Government to raise finances required for the battle against the pandemic. The estimate, seeking approval for expenses related to the pandemic totalling Rs. 73 billion was presented by Chief Government Whip Johnston Fernando.

The Government was seeking approval for pandemic related matters in all 25 districts including the North and the East. The excess funds are required to support COVID treatment centres, to provide relief to those who are under quarantine and for expenses incurred in the vaccination drive.

The Government was keeping close tabs on the economic fallout from the pandemic. Speaking in Parliament, Finance Minister Basil Rajapaksa said the Government has lost a total revenue of Rs.1,600 billion this year due to the COVID-19 pandemic. This will have a great impact on the economy.

“The revenue received from the Inland Revenue Department, Customs Department and Excise Department have declined drastically because of the present lockdown,” Minister Rajapaksa noted. The Government will work with the Opposition to try and resolve this economic crisis, he said.

“We will use foreign assistance with utmost diligence and will only work with institutions such as the World Bank and the Asian Development Bank (ADB) and will only opt for concessionary loan schemes. Sri Lanka will not agree to politically motivated donor conditions,” Minister Rajapaksa assured.

Meanwhile, the vaccination drive is proceeding at full steam at centres throughout the country. The Government estimates that ten million people – over 40 per cent of the population – have received both doses of the Coronavirus vaccine of whatever brand. The results of this will become evident in the coming weeks.

The full effect of the vaccination drive such as reduced transmission of the disease, reductions in the number of severe disease and deaths will be visible by the third week of October, State Minister of Production, Supply and Regulation of Pharmaceuticals Prof. Channa Jayasumana predicted.

“We have now begun vaccinating those aged between 20 and 30 years. They will get their second dose in one month. We hope the number of cases will drop drastically once they get the immune responses. The results will be visible clearly by the third week of October,” Minister Jayasumana said. The lockdowns are also apparently helping to drive the case numbers down.

The Minister also noted that there was some hesitancy to obtain the vaccine among some. “Some people who suffer from chronic ailments are reluctant to have the vaccine fearing that it may lead to further complications. Vaccination is the only option for such people,” the Minister said.

This factor was noted by Deputy Director General of Health Services Dr. Hemantha Herath as well. Because of this hesitancy, it was unlikely that the country will achieve a 100 per cent vaccination rate, Dr. Herath said. Some are influenced by misconceptions regarding vaccinations, he said.

“We cannot give the vaccine by force. However, we have been able to offer the vaccine to the majority of the people above the age of 60 and people belonging to other age groups. We will do our best to vaccinate the remaining population as soon as possible,” the Deputy Director General said.

This week, the doctors’ trade union, the Government Medical Officers’ Association (GMOA), also requested the Government to consider vaccinating schoolchildren. Children aged between 12 and 19 should be vaccinated before schools are re-opened to prevent the spread of the virus, the GMOA said.

A failure to vaccinate schoolchildren will delay the reopening of schools and have a significant impact on their education as well as their mental well-being, GMOA General Secretary Dr. Shenal Fernando said. President Gotabaya Rajapaksa has directed the Health Ministry to consider the request.

Meanwhile, although the nation’s current preoccupation with the Coronavirus pandemic has all but obliterated interest in political activity, the Opposition United National Party (UNP) passed a significant milestone this week, celebrating its 75th anniversary, although in difficult circumstances.

The UNP was routed at the last General Election in August last year, not being able to win even a single seat on an electoral district basis. Awarded one National List seat in the new Parliament, this was kept vacant until a few months ago when former Premier Wickremesinghe took his oaths.

The party’s future remains uncertain. Most of its stalwarts have defected to form the Samagi Jana Balavegaya (SJB) which is led by Wickremesinghe’s former erstwhile deputy, Sajith Premadasa. Despite several promises to relinquish leadership, the septuagenarian five-time Premier retains the mantle.

Celebrations to commemorate the party’s anniversary had to be curtailed because of the current restrictions necessitated by the pandemic but in an address broadcast online, Wickremesinghe promised to reorganise the party so it could face up to the challenges of the present time.

“We suffered a great setback in 2020. However, we have come back anew. We have embraced new technology. We have decided to go along with the aspirations of the people who reject traditional politics. We will reorganise the party,” Wickremesinghe said in his speech to mark the anniversary.

Wickremesinghe also invited other political parties to join the UNP in its efforts to develop the country. “Our party has come up with both short term and long-term plans for the nation. Our aim is to make Sri Lanka a great nation by the time it celebrates the centenary of independence in 2048,” he said.

Wickremesinghe has thus far resisted calls to step down from the leadership. Even if he does do so, it will be a humungous task for a new leader to re-establish the UNP as a viable political entity at a time when even the breakaway SJB is finding it hard to make a strong impression on the voting public.

Party politics will continue to take a backseat for weeks and months to come as the country tries its best to avert more disease and deaths due to the Coronavirus. A determined Government, an efficient and professional health sector and an understanding public have realised the need for this to become a reality. AdChoices